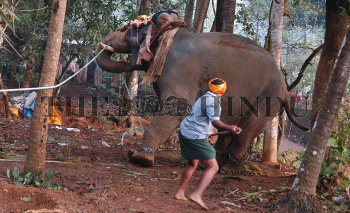 Caption : The elephant named Balu that runs amok amongst the fields causing destructions and the mahout was killed in between the Festival at Vellithirithi Kumarankulangara Bagavathy Temple in Kunnamkulam near Thrissur on Wednesday. The other mahout is trying to bring it under control. Photo: K.K. Najeeb 13-2-2008