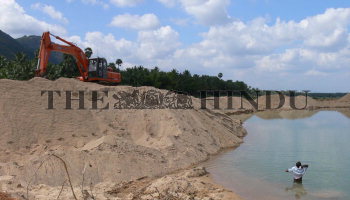 Caption : VELLORE, 13/02/2008: A nearly10-feet-deep pond that has been formed in the Palar river due to the indiscriminate quarrying of sand using an excavator at the government sand quarry in Kulithigai village in Gudiyatham taluk. The man standing in the pond is unable to go further into the water because of the dangerous depth. Photo: D. Gopalakrishnan