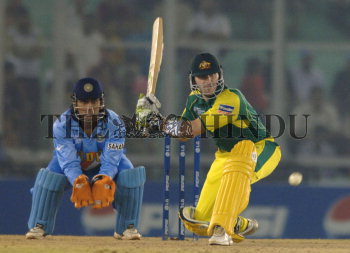 Caption : Australian batsman Damien Martyn eyes the ball to hit a shot off Harbhajan Singh as Wicket Keeper M.S.Dhoni looks on during the ICC Champions Trophy cricket match between Australia and India at the PCA Stadium in Mohali on October 29, 2006. Photo: S. Subramanium