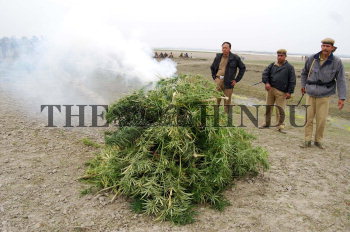 Caption : GUWAHATI„13-02-2008: (CANNABIS CROPS BEING DESTROYED BY ASSAM POLICE) Assam police personnel destroy cannabis (Ganja) crops during a raid operation at Andabhanga char area in Barpeta district of Assam, about 100km from Guwahati on Wednesday, February 13, 2008. A vast area on the bank of the River Brahmaputra has being used for cultivation of Cannabis by the local people. In this significant move against narcoties, the Barpeta district administration destroyed as many as 20 bighas of ganja (cannabis) cultivation in the char areas under this district. According to police, these crops are being sent to Bangladesh and various other countries. PHOTO: RITU_RAJ_KONWAR