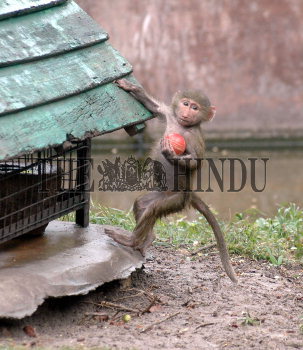 Caption : Four- month old Kushal , the baboon is the most sought after by the visitors and the caretakers alike at the Nehru Zoological Park in Hyderabad . A bundle of energy, playing with a ball , it was seperated from it's parents as two others baby apes were killed by the parents earlier . Kushal was brought up in the zoo's vet hospital and alloted a moat , where he is all to himself. PHOTO: P_V_Sivakumar (29/10/2006)