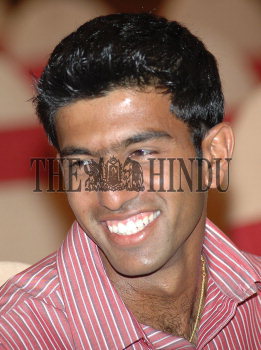 Caption : HYDERABAD, 12/02/2008: Indian tennis star Rohan Bopanna caught in a jovial mood at a function in Hyderabad on February 12, 2008. Rohan Bopanna was presented a purse of Rs. 25 lakhs by ACA secretary, V. Chamundeswaranath and his friends at the function. Photo: K. Ramesh Babu