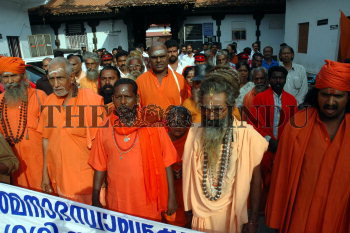 Caption : THIRUVANANTHAPURAM, 12/02/2008: Sanyasis under the banner of Rishi Maha Mandalam take out a march around the Sri Padmanabha Swamy temple in Thiruvananthapuram on February 12, 2008 to protest the Government's attitude to Hindu temples and institutions. Photo: S. Gopakumar