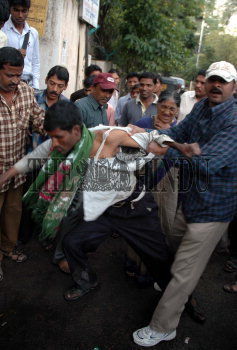 Caption : Photograph taken minutes later when Raheem, a chain snatcher who was nabbed while trying to flee after snatching a gold chain from a visually challenged woman, being handled by the public near Nizamās Institute of Medical Sciences in Hyderabad on October 28, 2006. Photo:Mohammed Yousuf