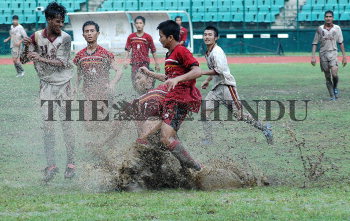 Caption : A football match between Mizoram and West Bengal in progress during the men's final of the National sub-junior football championship for the Mir Iqbal Hussain Trophy at the Nehru Stadium in Chennai on October 28, 2006. Photo: R. Shivaji Rao