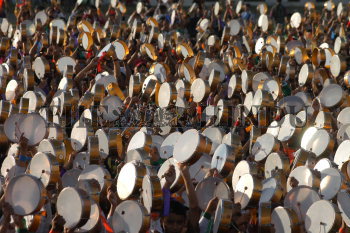 Caption : Drummers beat their drums to set a new Guinness World Record at Jawaharlal Nehru Stadium during the annual Autumn Festival in Shillong capital of Meghalaya state on October 28, 2006. 7951 drummers from all over the state staged the largest drum ensemble to set the new Guinness World Record title breaking the previous record held by Mickey Hart during the Global Festival for Peace for drum ensemble consisting of 4,374 participants in California which was again been broken in Hong Kong on February 20 last year by 7727 participants set by the Charity Po Leoung Kuk. Photo: Ritu Raj Konwar