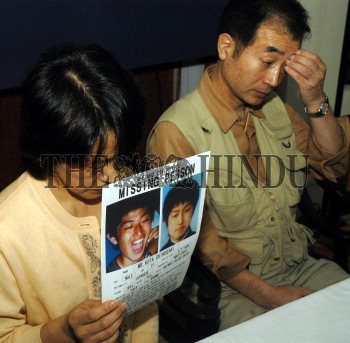 Caption : The mother of missing 21 year old Kota Shinozaki breaks down while holding a picture of her son. Shinozaki's parents arrived in India looking for their son who went missing just hours after he arrived in the Capital on 03 September, a police official said. Shinozaki passed through Indian immigration after landing at New Delhi airport aboard a Cathay Pacific flight, and witnesses last saw him carrying a rucksack. Photo: V.V.Krishnan 28-10-2006