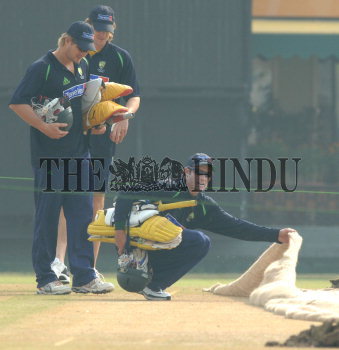 Caption : ICC Champions Trophy, Mohali, 28/10/2006:Australia's Mike Hussey lifts up the cover to have a look at the pitch watched by Nathan Bracken and Shane Watson during a practice session on October 28, 2006 on the eve of the ICC Champions Trophy match between India and Australia at the PCA Stadium in Mohali . Photo:S_Subramanium