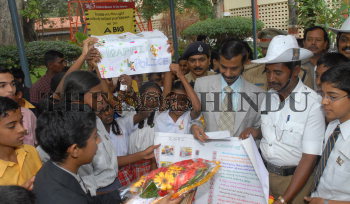 Caption : Children's Movement for Civic Awarness celebrates traffic police day in Bangalore on October 28, 2006. Children in a gesture of solidarity and good citizenship seen presenting the Commissioner of Police Achuta Rao and other police officers and constables thank you cards, flowers and ties band, as a symbol of the city's appreciation of their efforts. Photo: K. Gopinathan