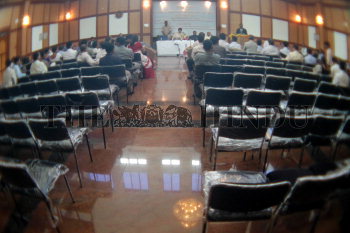 Caption : Picture shows the scene of a workshop on "Natural Disaster Preparedness and Mitigation for the Legislators of Assam" organised by the Govt. of India in association with UNDP, at Assam Legislative Assembly Hall in Guwahati. Assam Chief Minister Tarun Gogoi along with Speaker inaugurated the workshop, unfortunately from all total 126 MLAs only 11 were present in the workshop. Complaints were also raised at the Assembly session regarding the poor attendance of Ministers and Cabinet Ministers, out of 35 Ministers only 2 were present during the question-answer session. Photo:Ritu Raj Konwar March 30, 2003.