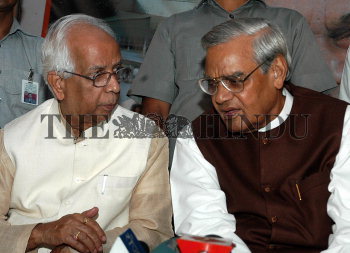 Caption : Former Prime Minister Atal Behari Vajpayee during a press conference on his one day visit to Lucknow to campaign for the BJP candidates for civic polls on October 27, 2006. Also seen is state president Kesari Nath Tripathi . Photo: Subir Roy