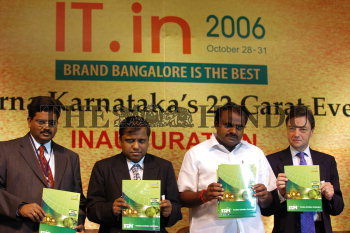 Caption : BANGALORE: The Karnataka Chief Minister H. D. Kumarswamy along with HE Sir. Michael Arthur, British High Commissioner in India (right), Dr Debesh Das, Minister for IT, Government. of West Bengal (2nd left) and B. V. Nadiu, Director STPI (left) releasing the book on Pavilion Exhibitor Catalogue, at the inauguration of the BANGALORE IT .in 2006, in Bangalore on October 27, 2006. Photo: K. Murali Kumar