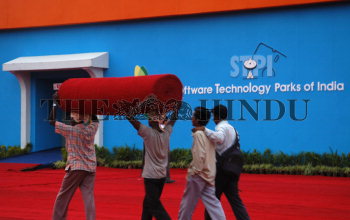 Caption : BANGALORE: Even on the day of the inauguration, frantic preparations were on to get the stalls ready for Bangalore IT.in. 2006 in Bangalore on October 27, 2006. Photo: K Murali Kumar