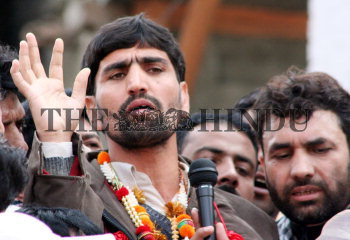 Caption : Farooq Ahmad Dar (C) also known as 'Bita Karate', waves towards the crowd after his release in Srinagar on October 27, 2006. Dar who was a frontline commander of Jammu Kashmir Liberation Front (JKLF) was released after spending 17 years in jails. Photo: Nissar Ahmad