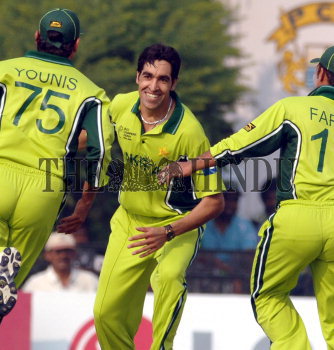 Caption : Paksitan bowler Umar Gul celeberates with captain Younis Khan (left) and teammate Imran Farhat after getting the wicket of Herschelle Gibbs in the ICC Champions Trophy cricket match against South Africa at the PCA Stadium in Mohali on October 27, 2006. Photo: S. Subramanium