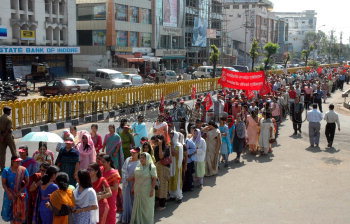 Caption : BHOPAL: Bank employees taking out a protest rally in Bhopal on October 27, 2006, during nationwide strike called by the United Forum of Bank Unions, to oppose the outsourcing, privatisation and the proposed increase in voting rights of foreign investors in private banks. Photo: A.M. Faruqui