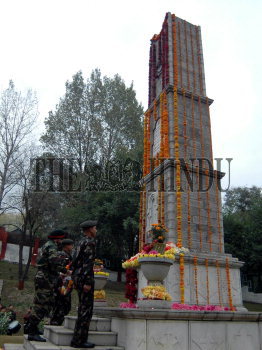 Caption : Lt. General A.S. Sekson (centre), GOC 15 Corps paying tributes, during a ceremony to mark Infantry Day in a garrison at Srinagar October 27, 2006. The army is celebrating the 59th year of their arrival in the Kashmir region. On October 27, 1947 the first batch of army soldiers landed in the Kashmir region to fight against Pakistani tribesmen. Photo: Nissar Ahmad