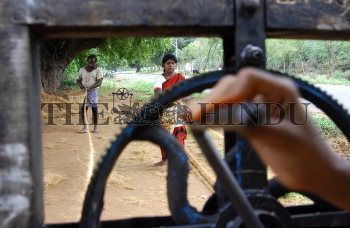 Caption : Workers twist coir ropes from fibres at Madhampatty near Coimbatore in Tamilnadu. Coir exports from the country during the first half of this fiscal has crossed 70,000 tonnes to stand at 71,840 tonne, value at Rs 268.43 crores. Exports in the corresponding period last year was 66,934 tonne, valued at Rs235,89 crores. Exports increased by 7.33 per cent and net value by 13.79 Per cent.according to coir board. Photo: K.K. Mustafah 27/10/2006