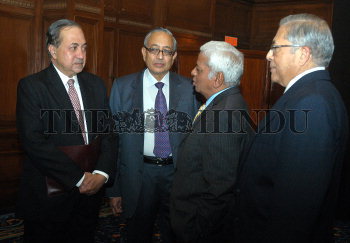 Caption : KOLKATA: (From left) N Ram, Editor-in-Chief The Hindu, N. Murali, MD The Hindu group, B. Muthuraman, MD Tata Steel, N.Ravi, Editor, The Hindu, during the launch of the Kolkata edition of The Hindu Business Line at a city hotel in Kolkata on October 26, 2006. Photo: Sushanta Patronobish