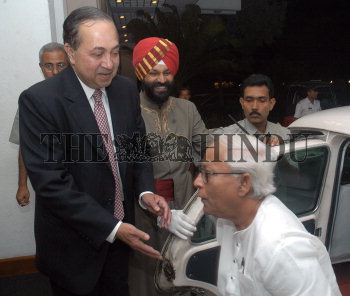 Caption : KOLKATA: West Bengal Chief Minister Buddhadeb Bhattacharjee is received by N. Ram, Editor-in-Chief The Hindu, during the launch of the Kolkata eidition of The Hindu Business Line at a city hotel in Kolkata on October 26, 2006. Photo: Sushanta Patronobish