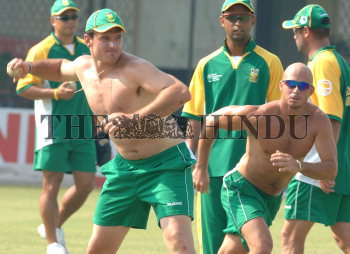 Caption : South Africa's captain, Graeme Smith gets ready to throw a ball as Herschelle Gibbs looks on during a practice session on the eve of their ICC Champions Trophy cricket match against Pakistan at the PCA Stadium in Mohali on October 26, 2006. Photo: S. Subramanium