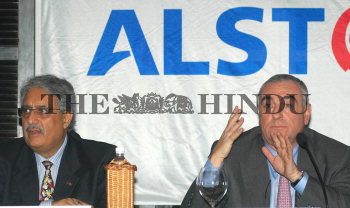 Caption : NEW DELHI: Philippe Joubert, President, ALSTOM Power and Sunand Sharma, Country President, ALSTOM India Projects Ltd (APIL) addressing the press regarding its prority for Indian Operations in New Delhi on October 26, 2006. APIL is one of the oldest foreign companies which has employed 2600 people across six engineering centres in India and enjoys a turnover of Rs 1000 crore. ALSTOM has identified India as one of its key market for Hydro-power development and its Vadodara Hydro facility is one of the World's three hydro-power manufacturing unit along with China and Brazil. Photo: Rajeev Bhatt