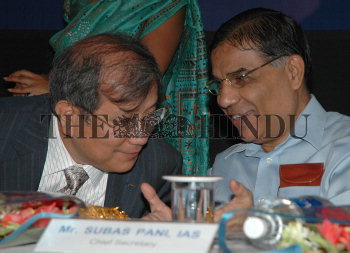 Caption : Soung-Sik Cho, CEO of POSCO-India converses with Chief Secretary of Orissa, Subhas Pani about POSCO-India awards scholarships to varsity students at a function in Bhubaneswar on October 26, 2006. Thirty five Oriya students received the award for 2006 and assured by the company that scholarships would be double up in 2007. Photo: Ashoke Chakrabarty