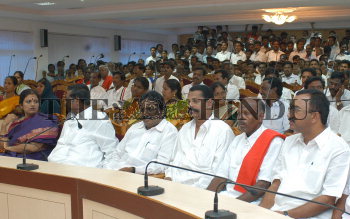 Caption : TIRUCHI: Newly elected councillors of the Tiruchi Corporation, assembled at a Council hall, for a brief reception after the swearing in ceremony on October 25, 2006 in Tiruchi. Photo: M. Moorthy