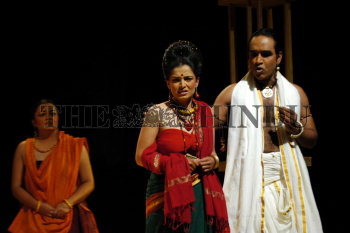 Caption : A scene from a play 'Yayati' by Girish Karnad, directed by Arundhati Raja, played during the inauguration of 'Kannada Rangabhoomi - Namaskara' a festival of 6 plays in English by leading Kannada Playwrights, at Ravindra Kalakshetra in Bangalore on October 24, 2006. Yayati (1961) is Girish Karnad's first play, at the centre of which lies desire: one man's desire for youth, one queen's desire for undisputed power in the realm, another woman's desire for revenge and retribution, a son's desire to follow his own path, a maid's desire for peace through a young bride, who has suffered a sham of a marriage ceremony to feed her desire to enhance her status. Photo: K Murali Kumar