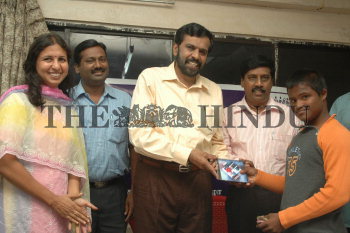 Caption : MADURAI: S. Karthik, who has featured in 'Little Space', a documentary film receiving the first copy of the film from Dr. C. Ramasubramanian at a function held at Madurai on October 24, 2006. Photo: G. Moorthy