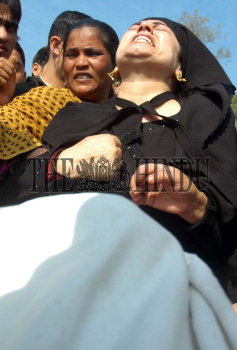 Caption : Relatives wail around the body of Imtiyaz Ahmad in Natipora area on the outskirts of Srinagar on October 24, 2006. Police used extensive force to disperse hundreds of mourners who set a police vehicle on fire and were demanding action against drunk policemen after Ali Mohammad and his son Imtayaz Ahmad were killed by a speeding police vehicle. Photo: Nissar Ahmad