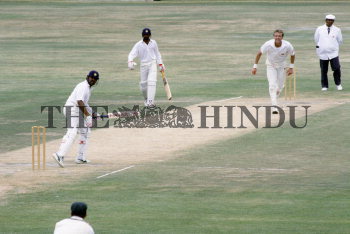 Caption : Kapil Dev of India looks back after edging a delivery from Allan Donald during his century knock, watched by umpire WA Diedricks in the third cricket Test match between India and South Africa at St. George's Park in Port Elizabeth, South Africa on December 29, 1992. Photo: V.V. Krishnan