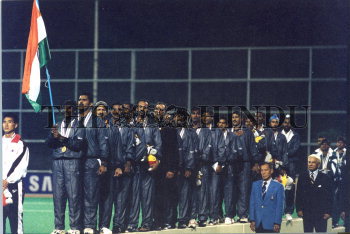 Caption : Members of Indian hockey team, with Dhanraj Pillay holding the national flag, at the podium after their victory over Korea in the men's final of the Asian Games 1998 held in Bangkok on December 19, 1998. Photo: Vino John