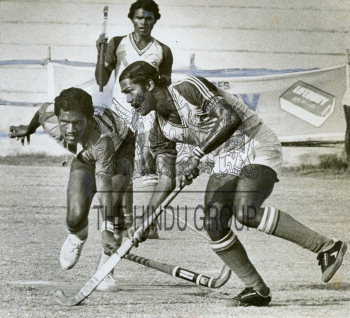 Caption : E.M.E. Jullundur's inside left Binary (left) is baulked by MECON's centre-half Joseph Tirkey in the quarter final league of the Murugappa Gold Cup hockey torunament at the Egmore Stadium, in Madras on June 20, 1983. EME beat MECON by a solitary goal. (Pubd. in The Hindu on June 21, 1983) PHOTO: THE HINDU ARCHIVES